Sweet Cinnamon Rolls! Made with pillowy brioche dough and cinnamon sugar tucked into every nook and cranny. This makes a BIG batch of dough that you can divide and save for later…or make extra all for yourself! It seems almost silly to write any more since you, like most normal people, saw “Cinnamon Rolls” and are like, “Yes! In! This is the only gift I need this holiday season!”

You probably started thinking about your favorite part of the cinnamon roll which is OF COURSE, the center. The gooey, soft, pull-apart, cinnamon-slathered, sweet, perfectly glazed bite. The bite you waited for the whole time or, if you’re like some of us, the only bite you took and then discarded the rest because why botherrrrr?!

Well, what if the whole cinnamon roll *was* like the center? What if every single bite was light and soft and buttery and sweet? What if the entire thing was draped in a silky smooth cream cheese glaze that seeped and sneaked into every single available warm cinnamony pocket? Yes. Yes. Goodbye dry, hard glaze-less outer bready bits! We’re here for brioche and we’re never turning back.

Your holiday brunches, your quiet mornings with a hot cup of coffee before everyone wakes up, your treat plate on the counter where you sneak bites in between all the stirs and mashes and temp checks of holiday meal prep…all of this just got so much more delicious.

In This Post: Everything You Need To Make Cinnamon Rolls

Ingredients You Need For Cinnamon Rolls

To make these pillowy dream machines come together, you’ll need some time and some patience and some butter. Those are definitely the big things, but there’s a few other ingredients on the list too.

About that butter. The absolute key to this perfect cinnamon roll, in our humble opinion (but also not humble…hiiii this is the best cinnamon roll!), is the brioche dough. It’s soft and sweet and airy. It is absolutely made to be soaked in cinnamon and sugar and warm drippy glaze.

Trust – it’s easier than you think.

This brioche dough that we’re using is ultra-pillowy, soft, and luscious. Also: stupidly easy. I have zero time for fussy bread recipes, so you know this is doable. You will be big-time rewarded with fluffy dough and amazing bread smells for all your (slightly) hard work. And hard work = 30 seconds of stirring.

Here’s all you have to do:

You can do it!

What Else To Make with Brioche Dough

If you love the texture of these rolls, which you will, this same dough recipe can be used in multiple ways! It’s a go to around here for lots of pillowy, plush, super tender baked yummies.

Here are my favorite ways to use that leftover dough:

How To Make Perfect Cinnamon Rolls

You’re already going to be peeking in that warm oven and absolutely high-fiving yourself left and right as you watch them pillow up over the top of the pan, but there is still more glory to come! That’s right, it’s a fluffy, light, thin but not too thin, covers and drips over everything cream cheese glaze. Icing? Glaze? Frosting? Reason for living? Whatever you call it, this one is just about perfect.

So there are some tips and tricks here because sometimes a glaze wants to lump, and we’re not having that. So you’ll want to make sure you use an electric mixer to whip it really smooth – the longer you mix it, and the higher the speed, the fluffier your frosting will be (but it then kinda melts down in the most wonderful way once it goes on the rolls).

You can also have some fun here if you’re feeling it.

We really do not know how you could possibly go wrong! Even if you do get some lumps. Can fully attest that the whole team ate a full batch of these cinnamon rolls with RECKLESS ABANDON and zero regrets.

In a way, making these perfectly soft, pillowy, sweet cinnamon rolls is a lot like gathering friends and family for the holidays. It takes a little time and patience and planning. But once everyone is all tucked in and ready to go, there’s nothing more warm, more cozy, more joy-giving than having them at the table.

How do you recommend storing these to keep them fresh?

If you have leftovers (ha!) keep them in a sealed container in the fridge and they should stay fresh for a few days! Reheat in the microwave or oven until warm.

How do I rewarm my cinnamon roll?

Just pop it in the oven at 350 degrees for a quick 5 minute rewarming treatment, or about 15-20 seconds in the microwave.

Can I prep and make these ahead of time?

Yes! See the notes section of this recipe for a sample timing option that shows how you can make these the night before and let them sit in the fridge until the next morning. And the dough itself can be made up to 5 days ahead of time and just kept covered in the fridge!

Source Notes: To get to light, pillowy, aggressively glazed cinnamon roll nirvana, I am using the method from the amazing cinnamon roll recipe in Bread in 5’s Holiday and Celebration cookbook (affiliate link). This is one of the best baking books I own for easy, do-able baking! Highly recommend and owe all credit for much of what I’ve learned about making brioche to them and this book!

Our House Favorite Cinnamon Rolls – the ones we make every year! With pillowy brioche dough and cream cheese glaze tucked into every bite.

Sample Timing – for less work in the morning: Make the dough the morning before; let it rise from 8-10am. Put it in the fridge. Roll out the rolls in the afternoon or evening, cover, and put back in the fridge. Take the rolls out first thing the next morning, rise from 7-8am, bake and be ready to eat by 8:30am.

Sample Timing – for last-minute people: Make the dough the night before; let it rise from 8-10pm. Put it in the fridge. Roll out the rolls the next morning from 7:30-8, let them rise from 8-9am, bake and be ready to eat by 9:30am.

Fridge Time: This particular dough can hang out in the fridge for up to 5 days. I don’t like to leave the pre-rolled rolls in the fridge longer than overnight because I feel like the filling starts to seep out. But the dough ball itself can hang out for 5 days.

Freezing: Currently freezing isn’t a part of my routine for these because I find that the dough is so rich and buttery that it’s hard to get a good second rise. I prefer to just work within that 5 day timeframe and store them in the fridge during that time!

If your dough is not rising: This happens to me every once in a while (due to variances in temperature of the room or temperature of ingredients). I find that it’s almost always because the dough is not warm enough yet. Assuming that your yeast was alive and you are smelling that sweet, yeasty smell from the dough, it just needs a bit more time, warmth, and moisture. Covering it with a damp towel and placing it near a warm oven for an extra 30-60 minutes should get it going. You can also try any of the tricks in this post– in particular I like the boiling water / oven method. 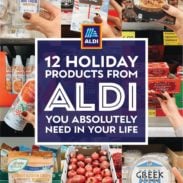 I Tried All of the Holiday Products at ALDI, and These Are The 12 Items You Absolutely Need In Your Life