April is a strange time for us this year.

From the moment the due date calculator online spit out April 26th, 2017, every commitment on our calendar submitted to that day and that month and that season. And that season is now. It’s Spring and it’s April and it’s nearing our day specifically, but our lives have completely changed. The parallel life of different, happier endings ghosts us around every corner. It’s Saturday: I should be packing a hospital bag. It’s nice outside: we should be installing a carseat and washing onesies. It’s Easter: I should be way too pregnant to hunt for Easter eggs. (Because yes, my mom still makes us hunt for eggs when we are 30. Thank you, mom. 💙)

Our big moment in April is here, getting closer with each day, but it feeling farther away than ever before. We’re walking through our lives on the wrong side of a cruelly indestructible, paper-thin veil – one that’s translucent enough for us to see our hopes and dreams unfolding differently just across the divide. It is real and it is hard.

A big part of that plan-your-whole-life-around-April thing was getting started with a remodel on our house. Or a build? Maybe it should be called a build. We aren’t really remodeling anything because there was nothing in our attic to begin with. We are talking about taking nothing other than a roof and some beams and making it into something – a livable space. And the reason for the build was, of course, April. The baby. Our son Afton.

We met with the builders the day before I was admitted to the hospital. We joked about how we would have to make sure not to have the baby early so they’d have time to finish. Wouldn’t that be complicated, we laughed. To have a baby before the remodel is done. But not to worry – we’ll have plenty of time – two full months to settle in, assuming the project will be done in early March.

Again with that paper-thin veil.

The day after we had sat at our kitchen counter joking about early deliveries, I was admitted to the hospital. And within a week, we had delivered our baby, held him as he died, and gone back home. One week, one lifetime. The building team was supposed to arrive on Tuesday, January 3rd, which was the day we came home from the hospital. Bjork had to call them from our hospital room: take the lumber back, call off the crew. Isn’t that the perfect picture of grief? a co-mingling of the sacred and the mundane? Meet your baby for the first time. Learn that your baby is not going to make it. Cry. Hold your baby, read to him, and change his diaper. Experience a holy love. Let him go. Cry. Realize that this is probably one of the lowest moments of your life. And then call a remodeling company and let them know that they need to come pick up the porta potty that has been left on your driveway. The mundane doesn’t go away just because your life has been turned upside down.

As you maybe guessed, since you’re reading a post titled “Attic Remodel Tour”, this thing is still happening.

In March, rather than finishing this project and preparing for baby, we resurrected the project and covered our house in plastic tarps and found ourselves with the porta potty in our driveway again. It’s so bittersweet: our 3D drawings of the space still include a bassinet drawn into the dormer. It’s an Afton-inspired space even though he won’t ever share it with us. The remodel is yet another way our should-have-been life is ghosting us.

But you guys, it’s also so, so good. It’s bringing joy, excitement, life, and CHANGE. We are not just the same people living in the same house – we have been forever marked by loss and by difference. And this change reflects our newness. It’s a gift. Part because of the symbolism, part because of the cute subway tile shower. 😍😍😍

An Update On Our Attic Remodel

Okay, so the beams are beautiful, right?

But that was about all this space had going for it. Even the brick chimney was virtually useless, since we have no fireplace and since the brick was out a 2 out of 10 on the coolness scale. Too much brick gunk, you know what I mean? There was no insulation (reminder: we live in arctic Minnesota) and the nails would freeze over every winter, putting literal frost on the INSIDE of this space. This attic was not compatible with real life. It was rough.

Step one: take out the brick chimney and get this space framed up. We were dividing one large space into four: a bedroom, a bathroom, a walk-in closet, and a “bonus room” aka cute area at the top of the stairs.

Then: insulation, to avoid the aforementioned frost-coming-in-through-roof situation. This was about the time we decided to vacate and head to Mom and Dad’s house with Sagey for a few days.

Then we came back home and the fun started.

WALLS. ROOMS. THIS IS REALLY HAPPENING.

Mostly recently, we picked our paint colors (light grey overload – same as what we have in the kitchen – and white to the max in the bathroom) and watched the tile go in, the trim get added, and the doors get installed.

So that’s it for Tour #1! To those of you who reached out with lighting recommendations after my Instagram story: thank you very much. That was super helpful and I think we got most everything picked out. DO NOT LET ME CHANGE MY MIND ON ANYTHING.

When the next phase is complete (carpet, light fixtures, cabinetry) I will be back with another tour, and then? once we get all settled? There will def be a final reveal. It might be in November 2045 because hello, I’m slow at decorating, but it will come.

Thank you for touring with us! Let’s pretend this was real and you were actually in my house and now I’m giving you a chocolate chip cookie. 💛 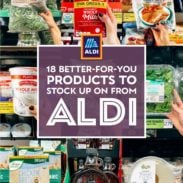