Just made this recipe, it’s crazy good. Like crazy good. I love how it beats any sauce that I’ve ever made- not because my tomato sauce sucks, but because of how delicious AND healthy it is!!! It’s literally a tsp of salt!!! I added a pinch of cayenne and some ground pepper to add a bit of heat! Thank you so much for teaching me how to make healthy delicious food !

🎶 This could be-the-start! of something new! 🎶 We are superexcited to be working with Almond Breeze in 2016 for lots of yummy + delicious sponsored posts! This recipe features their Almondmilk Cashewmilk blend which is 👌🏼.

Including but not limited to: traditional pasta, whole wheat pasta, gluten free pasta, or, if you’re embracing this as a SUPER NUTRITIOUS kind of dinner situation -> zucchini pasta!

It’s almost not worth talking about how creamy-amazing this combo is going to be, because with the velvety almond cashew milk and roasted red peppers and roasted garlic as the base, I mean, it’s essentially foolproof.

Even though we’ve already reached a solid YUM status just by making this recipe as-is, I’d like to encourage you embrace the most fun and most delicious phase that I call MAKE IT YOUR OWN.

Here are the steps for MAKE IT YOUR OWN.

That’s where the magic really happens.

Are you feeling pretty good how about how this garlic roasted red pepper pasta situation is going down?

For the Zucchini Noodles:

Just use regular spaghetti or pasta if you’re a traditionalist! 🙂

And you might find that you don’t need all the sauce depending on what kind of noodles you use. NBD. I don’t know about you, but I’ve never had a problem finding ways to use homemade creamy garlic roasted red pepper sauce before.

Shout out to Almond Breeze for partnering with us to make this plant-based creamy sauce a reality.

This recipe is part of our collection of best healthy gluten-free recipes. Check it out! 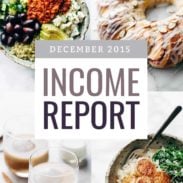 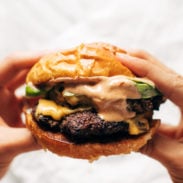 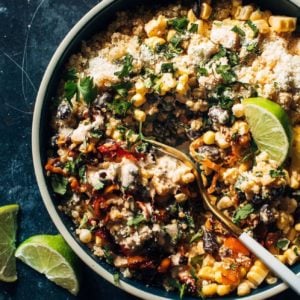 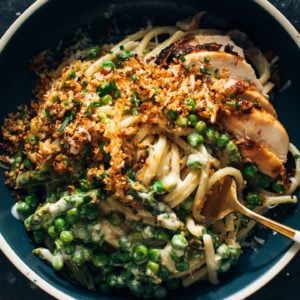 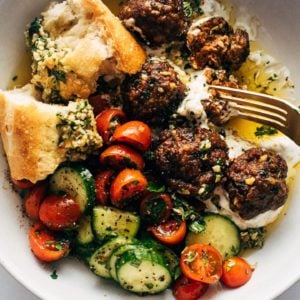