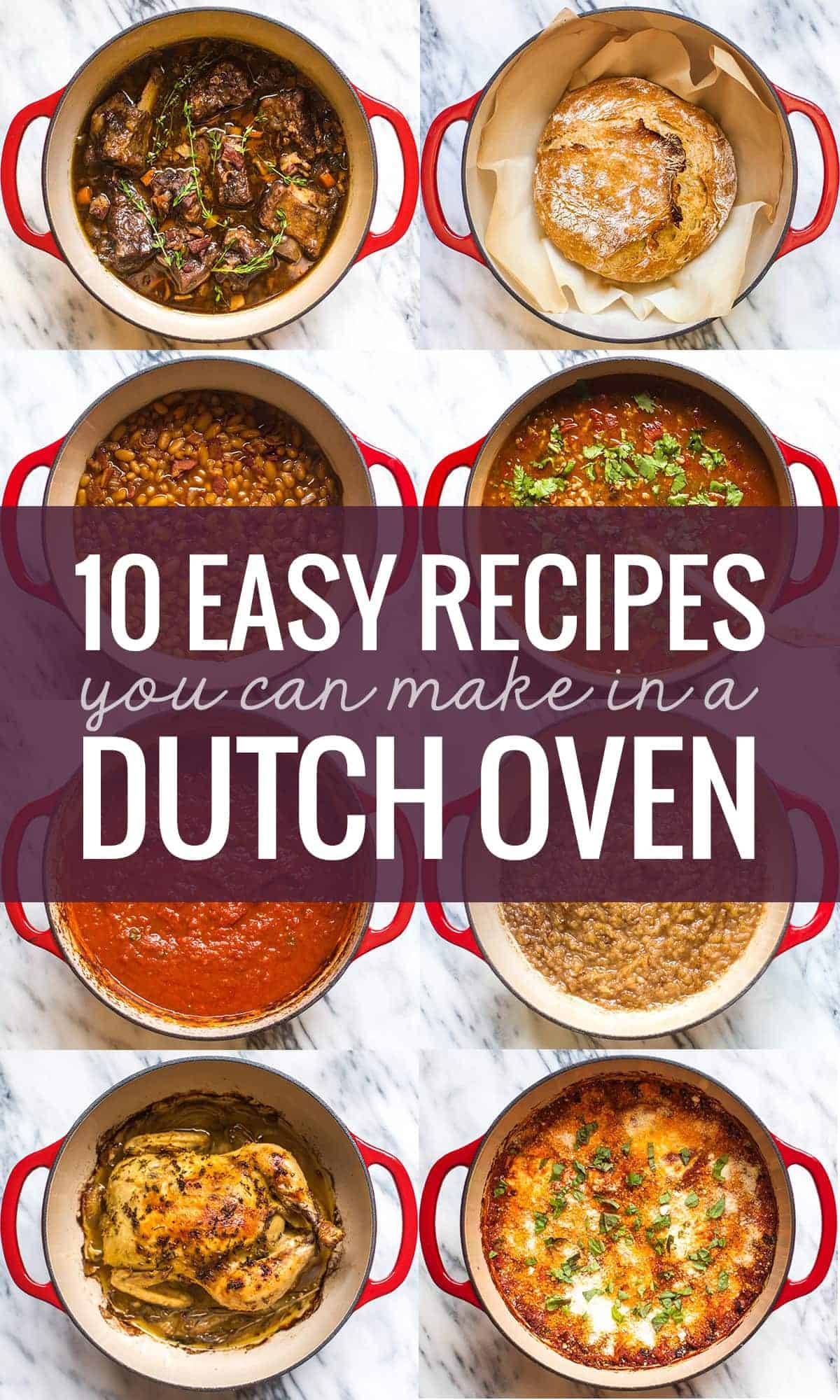 I wore mittens and a hat yesterday. NOT JOKING. 🍁❄️

This tragedy is leading me straight into the arms of today’s feel-better post about cozy, wintery foods you can make with a Dutch oven. Maybe cold times are not so bad after all.

Before we start, let’s just mention the fact that I didn’t even know what all the fuss was about until about a year ago when I first got a Dutch oven. I would always hear people talking about the amazingness of a Dutch oven and I’d be all WHAT’S THE BIG DEAL? And they’d be all WHY DO YOU HAVE A FOOD BLOG IF YOU DON’T KNOW ABOUT A DUTCH OVEN. 🙈

Just, I’m learning, okay? Sometimes it takes me a while to come around. And in this last year, I have most definitely learned about the delicious wonders of the Dutch oven. It is my most used (and cutest) piece of cookware, hands down, and it only cost me $50 at Target.

If you’ve never owned a Dutch oven before, let’s define.

A Dutch oven is thick-walled (usually cast iron but also ceramic and clay) cooking pot with a tight-fitting lid. Thank you Wiki.

It’s also a vessel that makes extremely delicious food easier to make because it’s sturdy enough to go from stovetop to oven. YAAAAS.

So what to buy? Do we spend hundreds for the cream of the crop or go for the garage sale version to start, as I did in with my food processor? 😁

I have only ever owned the Lodge Dutch oven (I have the 6-quart red version in red which is pictured here) and I highly recommend it as a low-risk, affordable, high-quality first go-round at the whole Dutch oven situation. It is ultimate coziness in oven-proof cookware form.

After using my little red $50 Lodge Dutch oven for the last year and realizing that, yes, indeed, the Dutch oven is worthy of its place in my kitchen, I am confident that I will have no future need for buying the more expensive versions. I mean, God bless those dreamy Le Creusets – they are super fun-looking and I’m sure they work wonderfully – but for me, the Lodge Dutch oven was the perfect in between for my competing Wants-a-Dutch-Oven and Doesn’t-Want-To-Spend-Hundreds-of-Dollars goals.

Check out the listing on Amazon – it has a 4.7 star rating from 3,500 reviews. Or if you’re a brick-and-mortar type shopper, like I sometimes am, you can also grab this baby at Target in the cookware section. The bread is definitely a winning trick of the Dutch oven, but there are other tricks as well, and here they come. Launching in three, two… 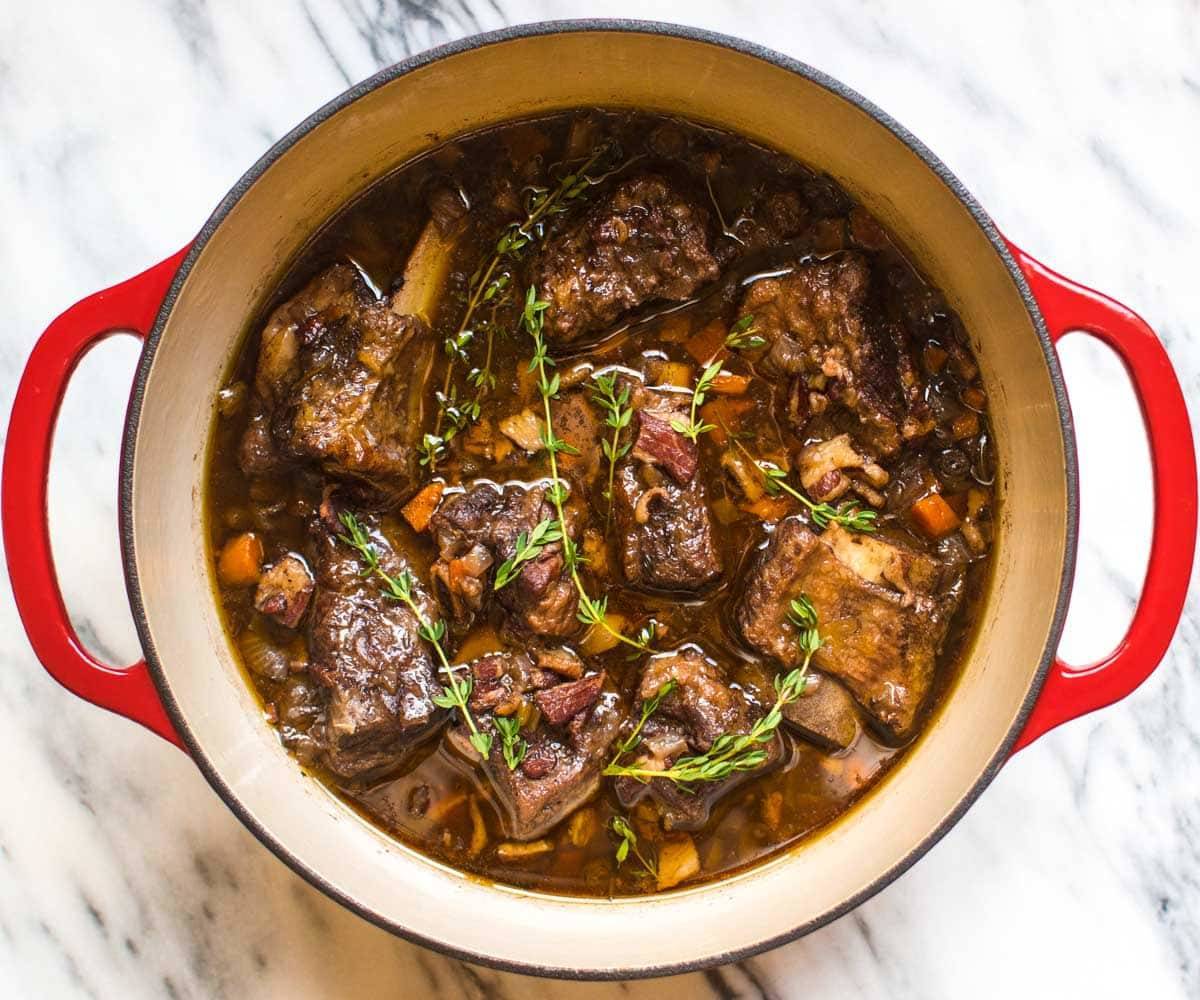 Why the Dutch oven works: Braised meat is perfect in a Dutch oven because you’ll sear the meat to get it brown and seal in all those juices, and then transfer it to the oven for several hours to get it all tender and wonderful, but you can keep it all in the same pot the whole time. Lazy girl win! 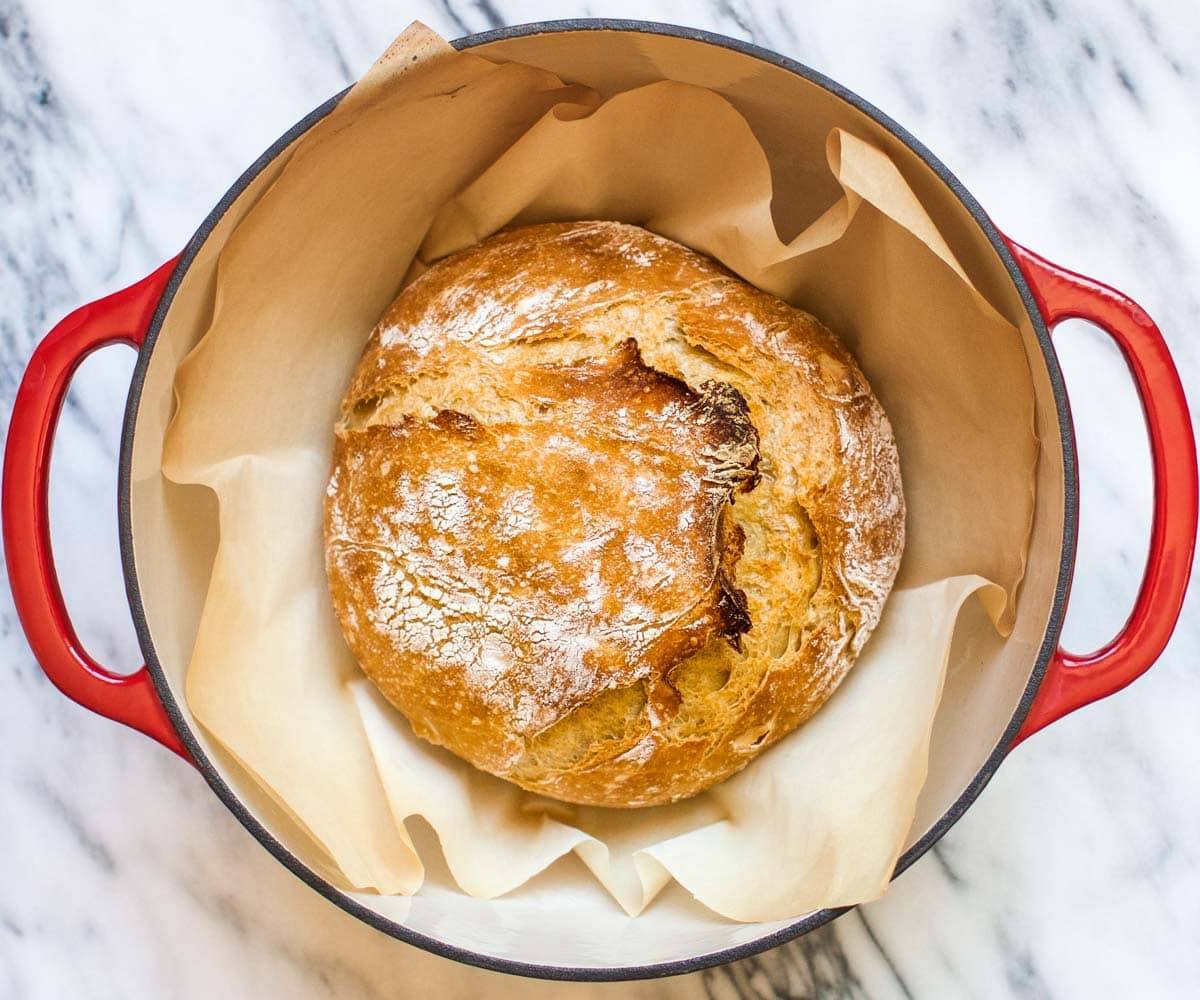 Why the Dutch oven works: According to Patrick Lynch – “By placing the risen bread dough into a 425°F Dutch oven, you get the massive surrounding heat of a professional oven, and in the covered pot the bread itself supplies the moisture needed to produce a great crust. Home bread bakers have two problems: home ovens don’t create or retain heat like commercial bread ovens, and home ovens don’t have the humidifier systems that professionals use to create the “crackling crusts” that artisan bread bakers treasure. Using Dutch ovens (covered metal or ceramic pots) solves both the heat and moisture problems.”

Orrr in laypersons terms, IT JUST WORKS. And it’s really, really good. This recipe alone is the one single reason I decided to finally buy a Dutch oven.

Recipe: my friend Stephanie / Girl Versus Dough’s No Knead Bread Why the Dutch oven works: You start this recipe by browning the bacon, but then you finish it off in the oven. One pan! Glory be. This guy needs to bake for quite a while, especially if you end up using dry beans, so being able to just leave a nice heavy duty pan in the oven for that long is really awesome. Why the Dutch oven works: Who knew?! An oven heats from every direction as opposed to the direct heat from a stovetop burner, which means it’s actually much easier to get the sauce to reduce gently in the oven, and it requires only a few stirs here and there – three cheers for that. Plus the top gets a little bit browned in the process which adds some really rocking flavor to this sauce. 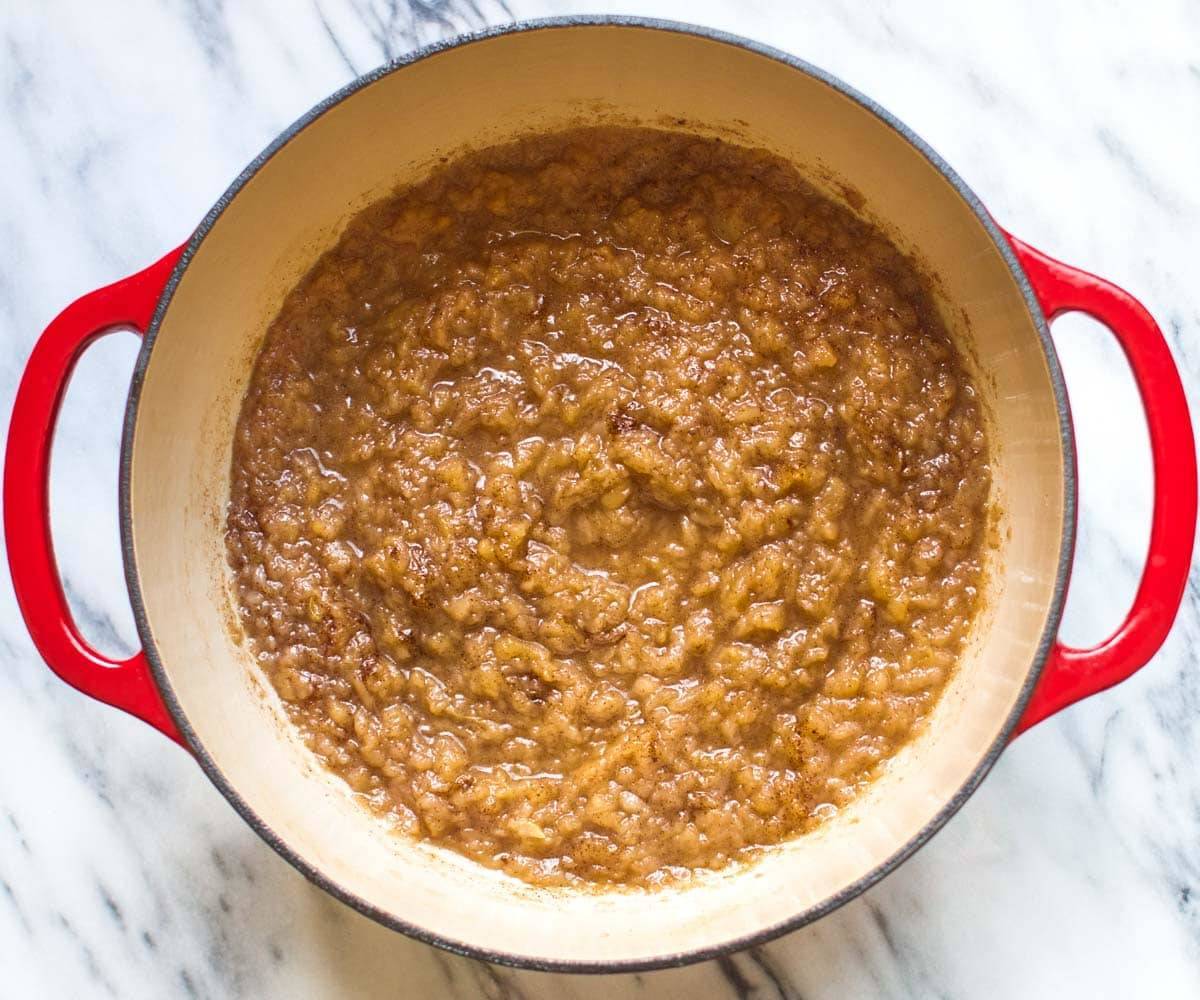 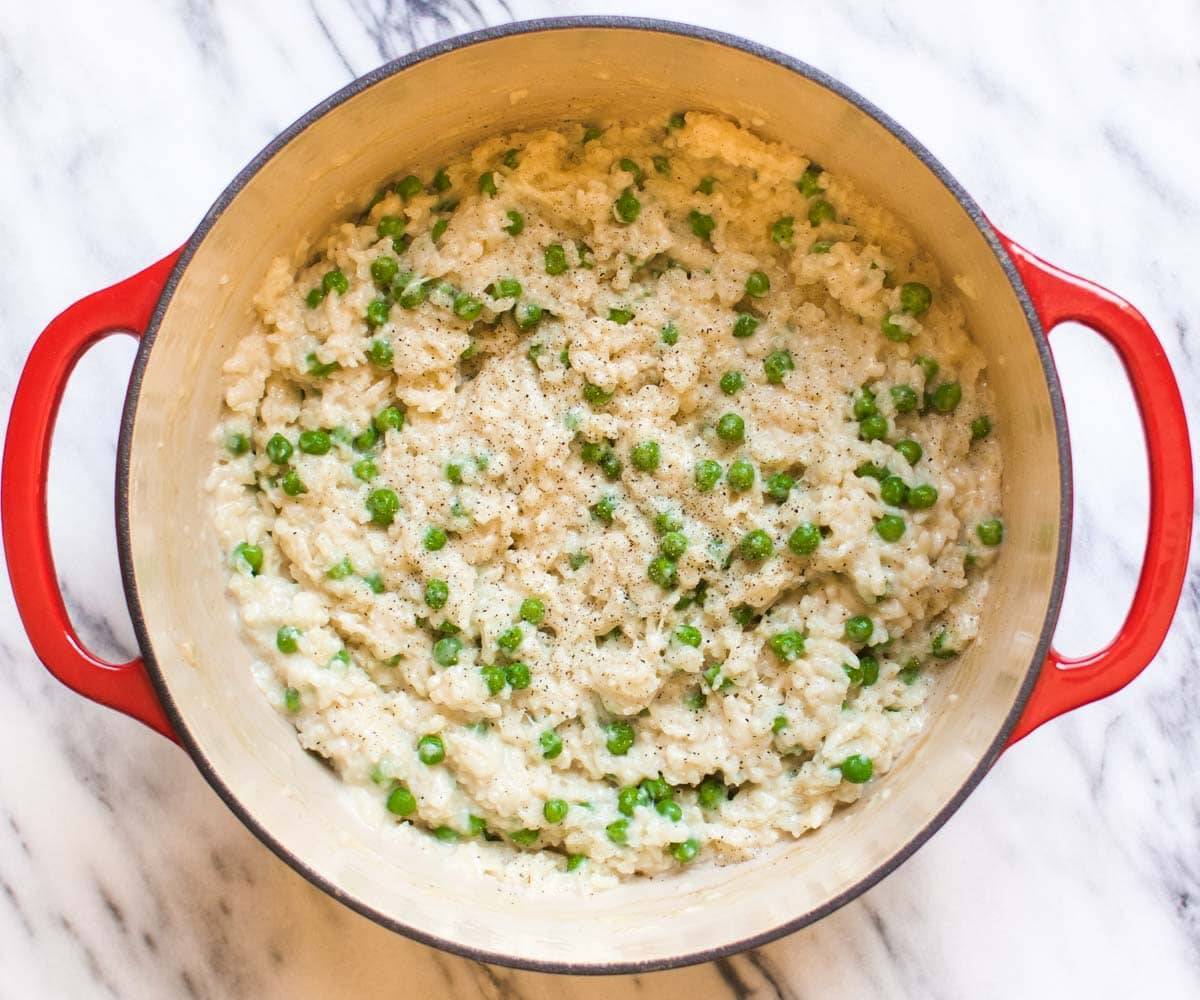 Why the Dutch Oven works: Risotto is good for a Dutch oven because it doesn’t require all the stirring and attention it does when made on the stovetop – it makes risotto almost hands-free! Which means more time for Instagram. I MEAN…

Note from recipe tester Kristin: I used this recipe as written but then added in chicken at the end for my meat eating family. 😊 It was so easy! 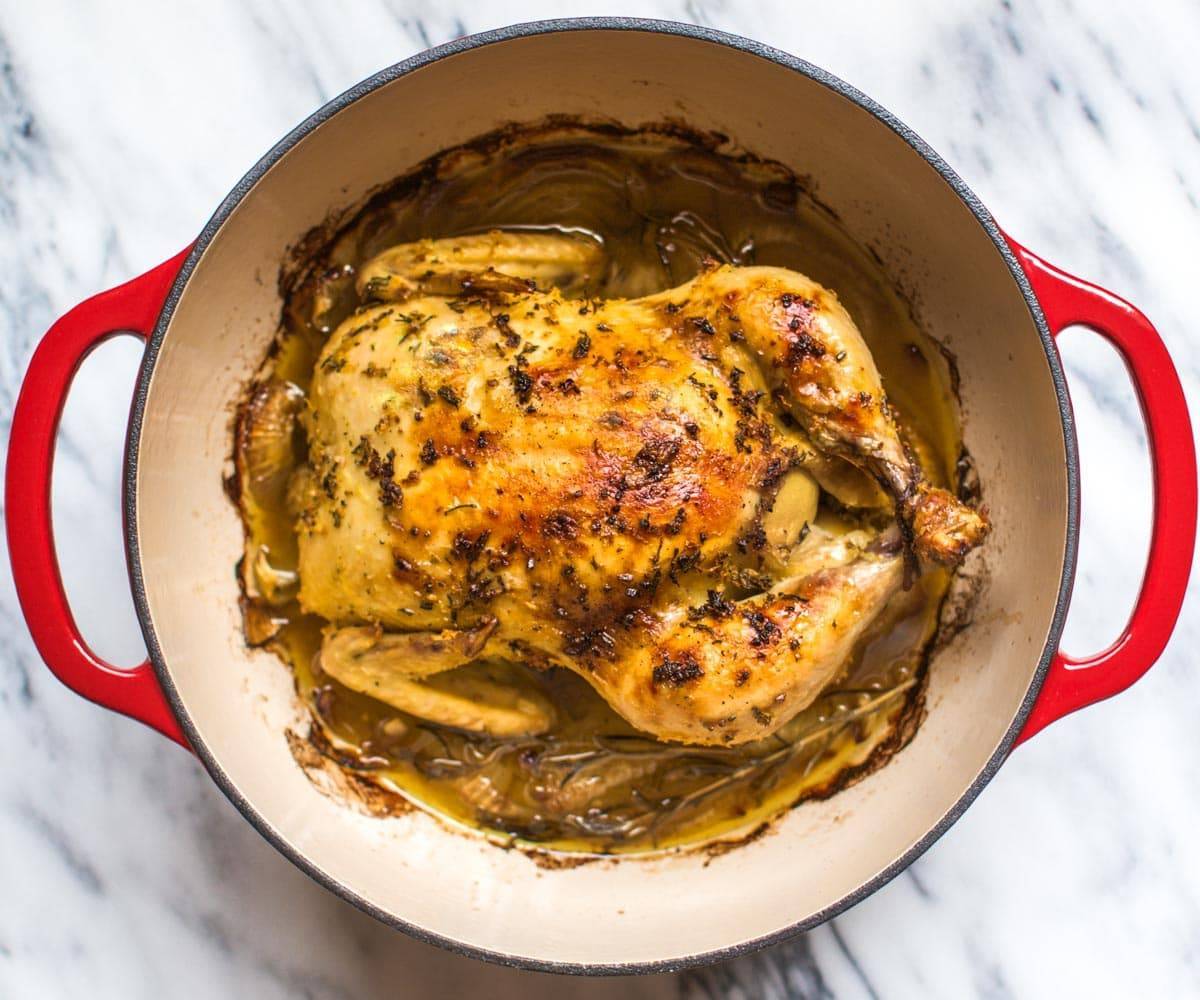 Why the Dutch oven works: It perfectly fits a chicken, and because it gets so hot on the sides , it helps roast it evenly on all sides of the chicken for awesomely crispy skin. If the skin browns too quickly on top, you can place the cover on to help avoid direct hot heat. But you know I liked that ultra browned skin. Look at us, making whole roasted chickens!

Note from recipe tester Kristin: I used this post for additional instruction with the timing and temperature for roasting. 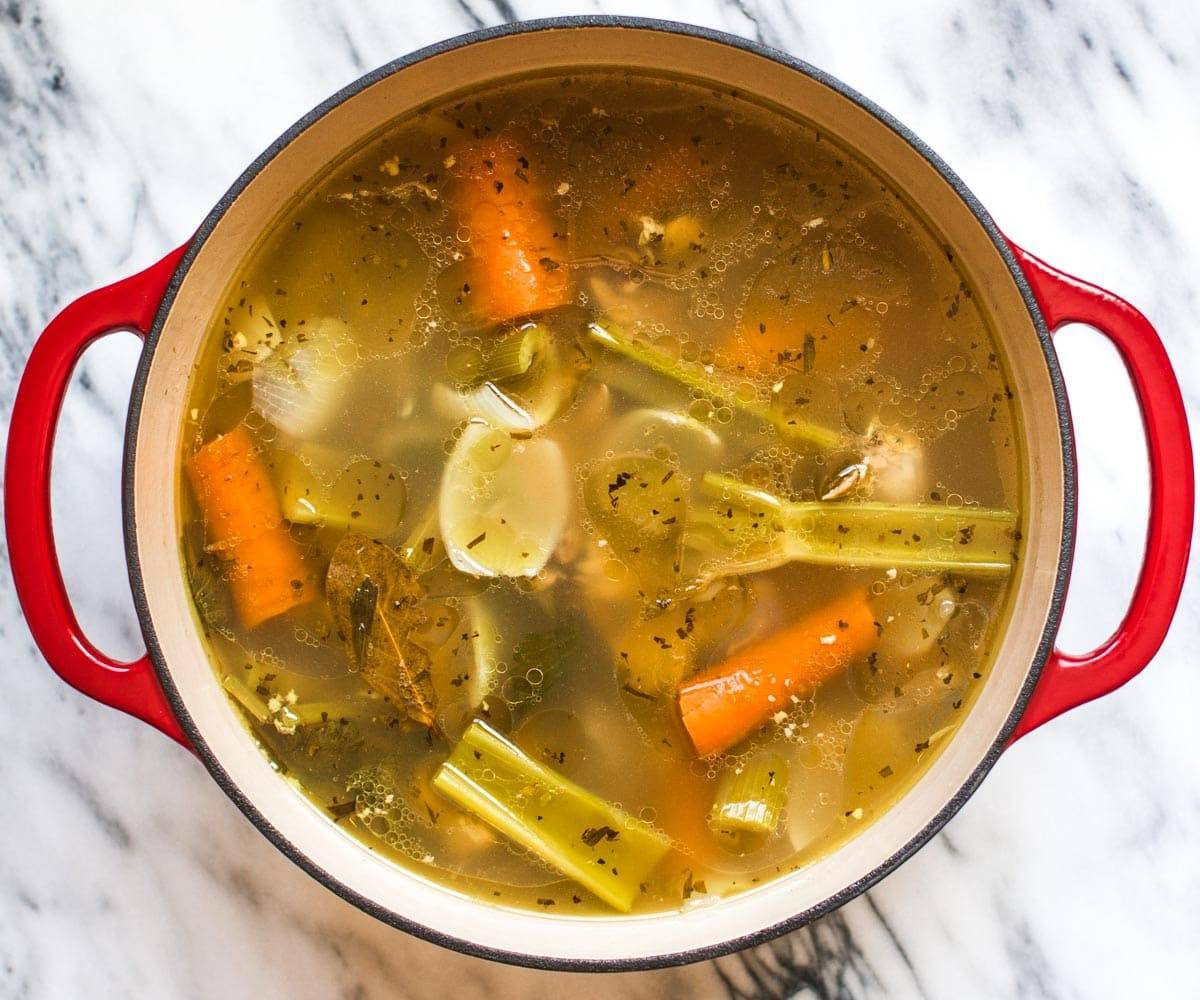 Why the Dutch Oven works: You can roast the chicken in there and then keep all the juices from the chicken in the pot as a base for the stock – no need to clean the pot after roasting the chicken! Party. The Dutch oven also stands up well to long periods of heat on the stove, which is part of the deal when you’re making stock.

Note from recipe tester Kristin: I used this post for additional instruction as well. Why the Dutch oven works: Start it on the stove, end it in the oven. So simple. Are you noticing a pattern here?

When we went Up North last week, I only brought one pan with me and you better believe it was the classy red Dutch oven. It’s like a part of the family now.

For the love of all things delicious and especially that NO KNEAD BREAD, you must at least investigate your options for this super versatile piece of cookware. Here’s the listing to the one that I have on Amazon with more than 3,500 reviews for your research purposes. I love me some Amazon reviews.

Wishing you all the best Dutch oven foods for fall and winter! ♡