I made this last night for a family party, and it was a hit! Seriously one of the best desserts I have ever made.

A thick, soft brown sugar crust sandwiching a heaping apple layer that is drizzled with homemade caramel: you down widat?

It’s been way too long since I made dessert. And WHO EVEN SAYS THAT. Not me, normally. And these apple crisp bars are my current vice.

For the majority of my life, I’ve been basically a walking sweet tooth. But the truth of the matter is that something happened to me after going sugar free for a period of time. I just don’t need the after-dinner dessert the same way I used to.

So here’s the miracle of the moment: even though my epic sweet tooth has sort of abandoned me in the last few years, and even though I’m not one to normally choose an apple dessert (just gimme the chocolate already), these bars with their caramely apple layer tucked in by a brown sugar-y crust on both sides absolutely rocked my world in the best possible way.

And then weeeeird things started happening. Like one night, out of nowhere, I found myself eating not one not two but many many of these apple crisp bars, and not only that but they were – wait for it – cold out of the fridge. COLD out of the fridge. It doesn’t even work –  where’s the a la mode version with melty ice cream?! This is a fall food crime.

But I’m here to tell you – cold straight out of the fridge. Rules were made to be broken.

This is my jam on so many levels.

These layered bars are so simple! Loaded with homemade caramel and apples. Caramely apple layer tucked in by a brown sugar-y crust on both sides.

When measuring the flour, I usually just scoop my measuring cup right into the bag. If you are normally more precise with the spoon-measuring, you might need a little more flour to make up for the difference. Just look at the texture – if the dough forms crumbles, you’re good. 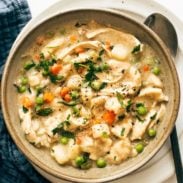