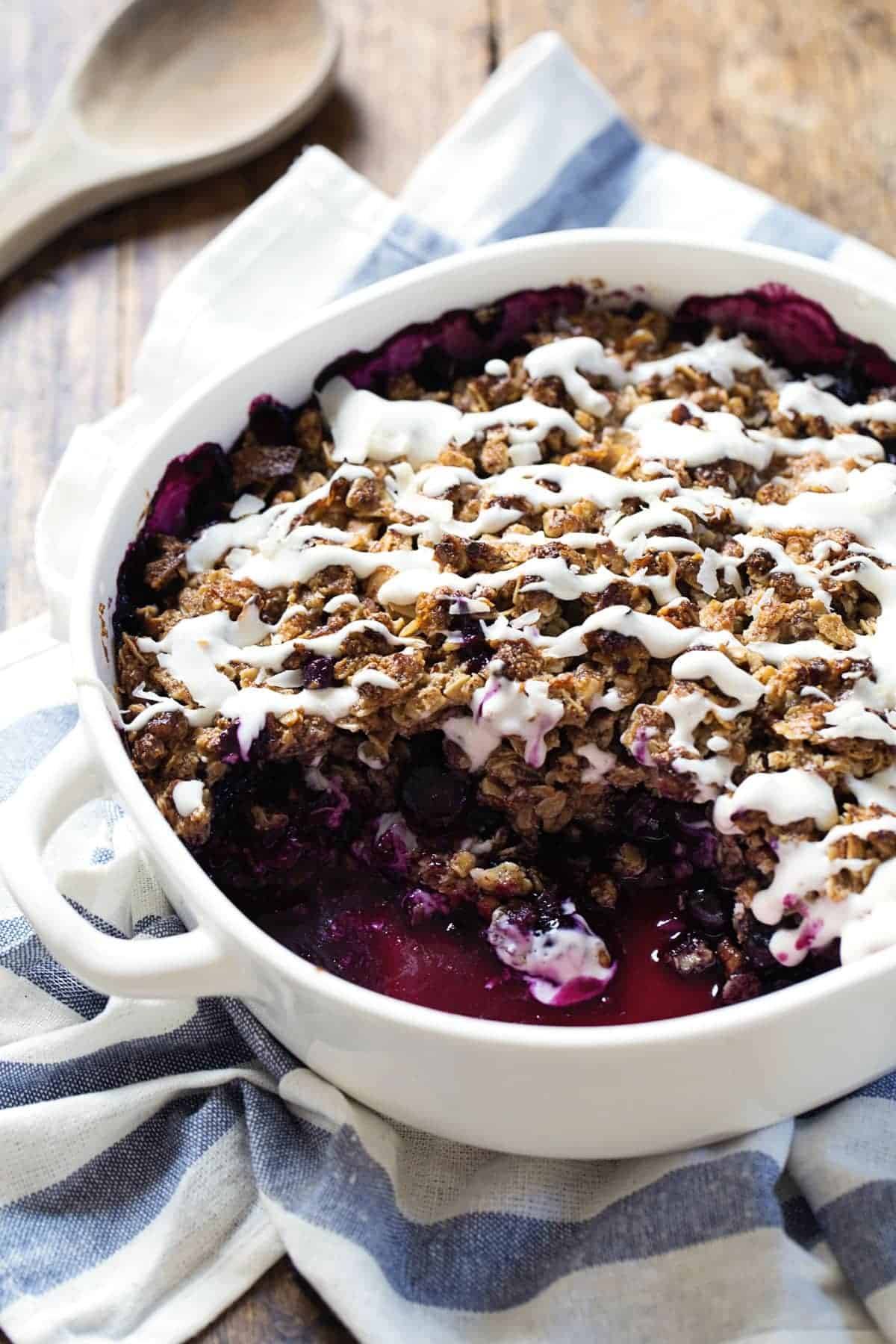 There are certain events in a person’s life that call for blueberry crisp three times in a row.

I’d like you to call one of those events to mind right now like right this very second, because you need this juicy sweetness in your life not once, not twice, three times over. Did you think of it yet? GET ON IT. We don’t have a ton of time here because your Hangry Dessert Self is about to show up.

I’m not sure what that three-time justifying event is for me other than … this blueberry crisp. So just to repeat that, I’m celebrating the making of blueberry crisp (which, FYI, is bursting with juicy summer fruit and overloaded with an ohmygosh so good lightly cinnamony oat and pecan crumble on top that is both whole grain and refined sugar free) by making the blueberry crisp again and again and again, and eating the leftovers for breakfast.

How to make our Blueberry Crisp (40 SEC): We have this tiny problem in our family and it’s called Food Blog Leftovers. Just let me say this: it’s really an incredible problem to have and I seriously mean that. It might be the best problem of all the problems anyone has ever called a problem. I really try not to take it for granted that we have a fridge full of mostly healthy and very fresh food on any given da- okay, just ignore that drawer on the bottom left.

Things We Do To Be Useful About Our Leftovers:

So naturally, we take leftovers really seriously, and it’s so so so awesome when the opportunity to share food arises because it helps us with our problem that’s not actually a problem.

Enter a pan full of leftover blueberry crisp. Bjork was literally finishing his second bowl of this when I started packing it up to bring to a friends’ house and –> HOLD IT RIGHT THERE <— it was suggested to me that maybe we should actually keep this whole pan for just us. More specifically, just Bjork. My nerd-sweetie reeeeally loves a good fruit crisp.

I said no, obviously, we don’t need to keep a whole pan of this sitting around our house just for us, and we brought it to our friends. Buuuuut then I made it again the next night. And again the next night. And somehow, we are able to deal with the mass amounts of blueberry crisp without any issues at all. I mean, I don’t even know where it’s going anymore. It’s, like, magically disappearing and somehow my lips and my shirt are all stained blueberry-blue. What the what. In addition to being super wonderfully delicious (maybe even more so to us since we are kind of scaling back on the shuggrr in our lives) this is a dessert that I honestly feel really good about eating in the way of putting good things into your body. Totally cool to eat for breakfast, if you ask me, because almost every single ingredient is a nutrient-packed whole food. Almond meal, oats, pecans, flaked coconut, blueberries, olive oil, cinnamon – this is truly a powerhouse drool-worthy dessert.

I got the starting idea for this recipe from the most amazing book I’m reading called Bread and Wine by Shauna Niequist. I literally finished the first page and thought to myself: I’m going to have to read this whole book again because I already love it so much. In addition to being a spiritual memoir of sorts relating food, relationships, and experiences around the table (which I heart), it has a recipe at the end of every chapter. Huzzah! This is my kinda book. 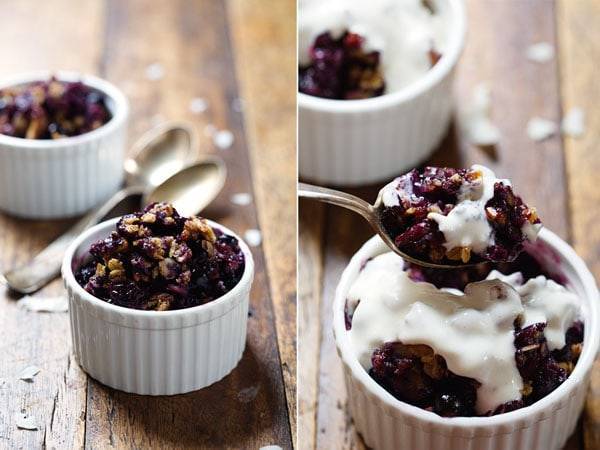 Alright, I’ll leave you alone now with one last Attack of the Superlong Image to convince you once and for all that this is the most glorious summer dessert and that it’s worth making three times in a row.

While you get your lips turning all blueberry-blue up in there, I’m going to be going on a super fun and wild (read: mild) adventure for a few days on a girls’ trip with friends from college since we are celebrating ten years of friendship? how and oh my wow?! The blog will keep on runnin’ and you can catch our live trip adventures on Instagram! Also, debating packing a batch of this in my suitcase. Normal, right?

For the little drizzle on top, I creamed 8 ounces low fat cream cheese with 1/2 cup light coconut milk, 1 teaspoon vanilla, and 2 tablespoons raw honey. That will give about 2 cups of coconut “sauce”, which is way more than you’ll need for the crisp, so you could either halve the ingredients to make less or just keep the leftovers in the fridge as a fruit dip, like I do! Num. Or just use ice cream, too!

The nutrition facts here do not include the coconut cream cheese drizzle – they are just for the blueberry crisp.