We’re bringing you a plate of sunshine for dinner! Perfectly golden-crisp salmon partnered next to oven-roasted asparagus and a buttery, rich, creamy leek sauce piled on crispy potatoes.

We enjoyed this as an easy weeknight dinner! Loved the crispy salmon and the creamy leeks. Thanks for the recipe.

This dish is for everybody, but especially those of us who have been living in the hideous splotchy grey of winter’s end because it’s like, “Oh heeeeey! Remember color?! Look how beautiful and bright and warm! I am a gorgeous food painting for your eyes!”

The bright inexplicable pink of the tender flaky salmon, with golden olive oil-crisped edges. The deep green of the roasted asparagus calling us towards springtime. The pale yellow of the creamy leek drenched potatoes, speckled with bright pops of chives, an almost neon slice of lemon.

It’s like technicolor. It’s delicious. It’s bold and light and it’s serving up sunshine for dinner.

Bright, Fresh, and Happy Ingredients For This Spring Salmon

This one is such a stunner because ingredients like lemon and asparagus and bright fresh salmon sing like spring birds, but the star here is the roasted potatoes with those creamed leeks. They’re creamy, rich, and decadent but with zips of fresh lemon zest. You may want to eat just a whole pan of those, but we promise the whole plate is a song. Here’s what you’ll need to make it happen:

For your sheet pan:

If you want to skip the oven or skillet for your salmon, we have a guide for all the delicious ways to cook salmon.

All things told, this is pretty easy to throw together. The leeks are the only diva here because it takes a few soaks to get them grit-free, and then you have to get them all creamy buttery soft, but again, this star is worth every darn step. So here we go:

How To Cook Perfect Salmon

You have a couple of options for making the salmon here. We often gravitate toward baking salmon because it is our best no-fuss, no-brainer way to get a perfect cook on it. And you could definitely do that here by tossing it on the pan with your potatoes and asparagus! BUT, if you are willing to take one extra step and have one extra thing to clean, we really recommend crisping these fillets up in a skillet with olive oil.

The golden brown crispy edges that you get all over are a whole other level in terms of texture and taste in this dish. The salmon does cook pretty quickly, so you have to baby it a bit so it doesn’t dry out. Again though, that golden crisp…oof, worth the extra pampering.

This bright, colorful, super delicious, and deeply satisfying spring dinner is waiting for you. Please do answer its call, won’t you?

Will my salmon get crispy if I pop it in the oven instead of cooking it in a pan?

Baking sheet will be the easiest method, but it won’t get crispy and personally I love the crispy exterior! If you want the easy option, just throw your salmon on the sheet pan with the veggies and creamed leeks for the last ten minutes of cooking.

How do you get all of the dirt off of the leeks?

If you dump the contents of the rinsing bowl into a strainer, all the dirt at the bottom will just go right back over the top of the leeks, which is why it’s helpful to first pull them out with a skimmer, or just with your hands, and then discard the water.

We’re bringing you a plate of sunshine for dinner! Perfectly golden-crisp salmon partnered next to oven-roasted asparagus and a buttery, rich, creamy leek sauce piled on crispy potatoes. 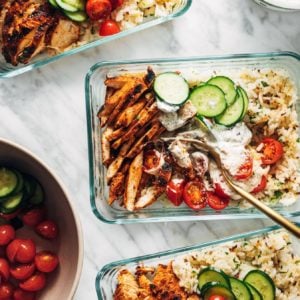